Sources of cosmic rays (protons, Helium nukleis,...) according official science can't be more distant then 3000LY from us. It is very unprobable, that there are only two independent sources of cosmic rays on the whole sky, what could be some black, holes, neutron stars, or any other similar object, what are accelerating cosmic rays directly toward us.

Hot spots close Castor and Polux so also represent object what is moving toward us circa in plane of Ecliptic, with shifts of smaller parts of spots what represents opposite yearly motion of our Earth on its orbit.

Results of Milagro survey so are two hot spots next to Orion what are actually projections of coming Nibiru... during spring and autumn equinoxes. Their appearant distance (of two spots at Aldebaran and at Castor, Polux) among stars on night sky so represent also distance of Nibiru from us circa 1,5 billions km,...like Saturn from us,..so it means arrival of Nibiru to perihelia in 3 years, in 2012!

Why are there two spots and not one bigger? It is so because when Nibiru is going toward us and Earth is circa close to Spring or to Autumn equinoxes, so motion of Nibiru is circa parallel with motion of Earth and so Nibiru is longer time appearantly on one place on sky. When Earth is close to Summer or Winter solstices so paths of Earth and of Nibiru are circa perpendicular and so Nibiru apearantly moves much quickly on sky than during equinoxes and so there are only those two spots,.. 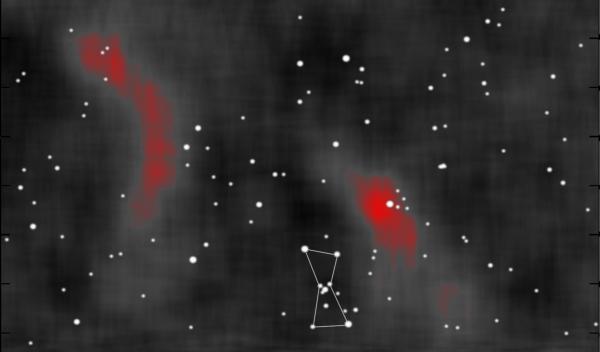 Rests of Noe's ark and stone anchor discovered on Ararat slopes in height circa 1800m.

How was that possible? Nibiru sucked waters from one hemisphere to second one, so particular time on north hemisphere was circa doubled total water amount, so such way even Caucasus,..was under water longer time,...

Asirian texts with Utnapisthim's story are very similar to Noe's one.

Chinese texts from stone on top of one mountain. There is description of flood in China,...till level of everlasting snow/till circa 2000m. Description of how to desalinate land after flood!

Painting from stone near Fergana-Usbekistan, legends from that area,...time line similar to end of Atlantis.

End of ? of Precession cycle 25000-26000 years long. There was first catastrophic end of Atlantis, dramatic temperature change 13000years ago.

All planetoids behind Pluto, Pluto, Neptune are close to perihelia or aphelia on their orbits. Why?

Opposite motion of Sun with inner planets toward arriving Nibiru causes projection, appearant changes, such shapes of that outdoor planets,' planetoids' orbits.

North magnetic pole accelerated motion in last decades,..toward North, toward plane in direction of Orion, of coming Nibiru.. Magnetic field is weaker so that in this change velocity it would disappear after 1500years. Last such full change was 730000 years ago and this change had to be earlier than this time. There were 30 magnet. Poles switches per last 22 millions years.

Magnetic pole change about 30 degrees on Saturn in last years.

Water level rise, but only on north hemisphere,...rising number of extreme floods, strong winds, hurricanes, tornadoes, earthquakes, temperature records,..due to rising level of tidal forces from coming Nibiru,...especially in time about 21 jun, 23december when earth axis is in plane pointing toward Orion, coming Nibiru, when Moon, Sun, some other planets like Venus, Mars, Jupiter are too circa in that direction.

Results from Milagro Los Alamos observatory 10 years long cosmic rays survey. Results are two hot spots next to Orion what are projections of coming Nibiru during spring and autumn equinoxes, represent also distance of Nibiru from us circa 1,5 billions km,...like Saturn from us,..so it means arrival of Nibiru to perihelia in 3 years, in 2012!More is on hamops1.szm.sk

and over there mentioned webs.

From 9km per year to 64km per year now since 1900, so this is change of speed of North magnetic pole. Earth's magnetic field is also weaker and weaker in these years. Official proposals are 1500 years till geomagnetic reversal, but I think that it could be in 2012. Period of geomagn. reversals is from 100000-1000000years, typically 780000years! Change of magnet. pole position goes from that direction where Nibiru is coming to us too, based on my research, calculations,...

Start a Free Blog at Webs.com